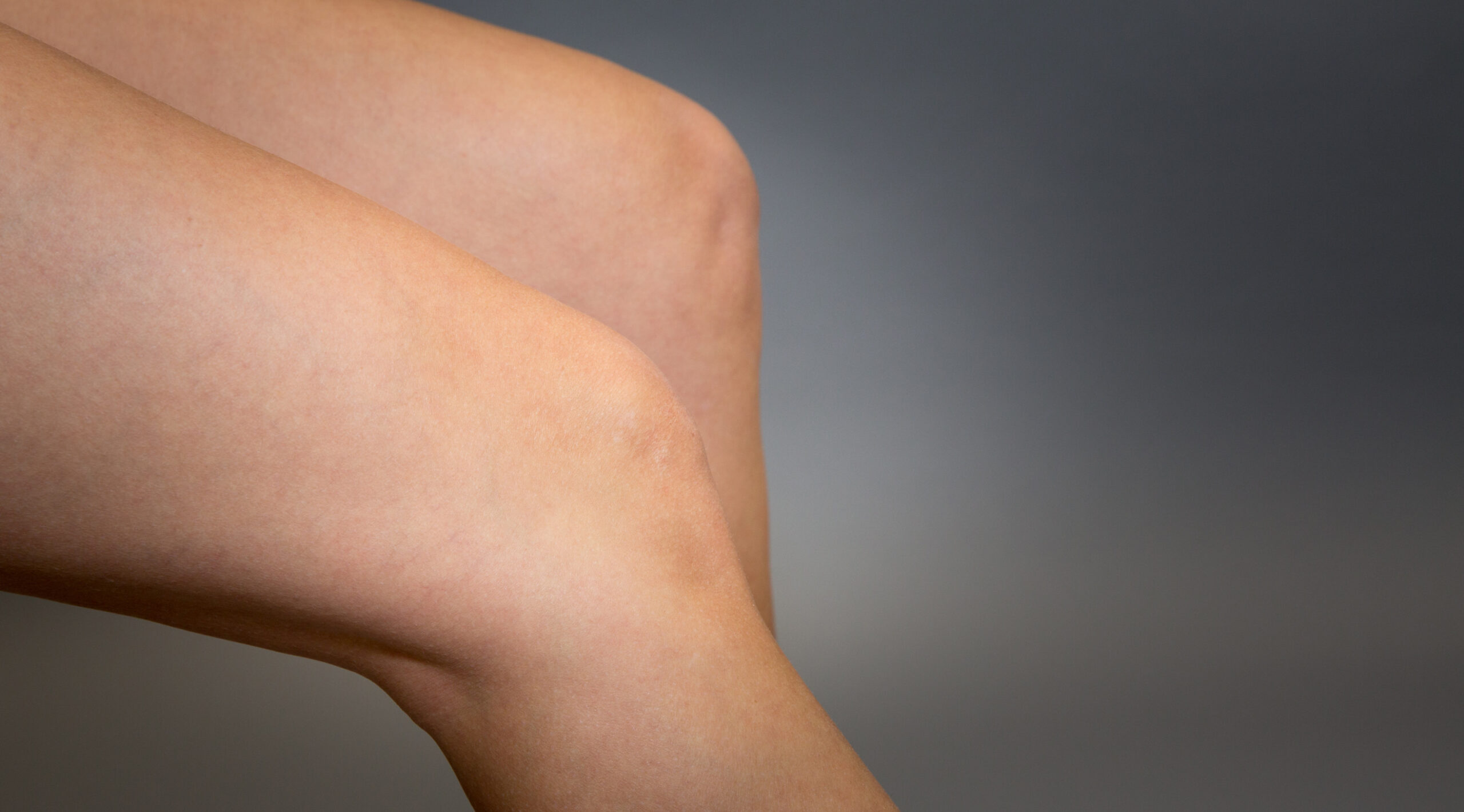 The function of the knee joint is based on a complex interaction of bone, cartilage, menisci, ligaments, tendons and muscles. Disorders in any of these structures can lead to an unstable and/or painful knee.

Sports injuries to the knee joint can be caused both by an accident (traumatic) or the effect of constant overloading (chronic). Traumatic injuries usually affect the ligaments (e.g. torn cruciate ligament) and the menisci (e.g. torn meniscus). Chronic injuries mainly affect the cartilage, which can be thinned out by constant overloading (early arthritis = wear and tear of the joint).

Regarding the knee the treatment of torn ligaments, meniscus injuries, cartilage damage, joint wear (arthritis) and malalignment of the legs are the focus of our department. In addition, we also cover all injuries related to the kneecap..

Many of the operations to the knee offered in our department are performed arthroscopically. Only small incisions are required (so-called “keyhole” technique) and a camera is inserted into the knee joint, using which all surgical steps can be performed and monitored on screens in the operating room (Fig. 1).

The main function of ligaments is to stabilize the knee joint. Tearing one or more of these ligaments therefore leads to an unstable knee joint, which prevents the patient from performing sporting activities. In the long term, an unstable knee joint also leads to incorrect (non-anatomical) loading of the cartilage and menisci, which can damage these structures leading to arthritis.

A torn anterior cruciate ligament usually does not heal back together again, so that replacement of this ligament is usually recommended for active patients. For the replacement of the anterior cruciate ligament, our department prefers to use tendons of the knee flexors (the tendons of the semitendinosus and gracilis muscles) (Fig. 2), which are pulled into the knee joint through drill holes in the thigh and lower leg bones (Fig. 3).

A tear of the posterior cruciate ligament can often be treated at an early stage without surgery. Special splints, which must be worn for at least 12 weeks, are used to try to bring the two ends of the ligament together so that they may grow together again.

A rupture of the medial (inner) collateral ligament often does not require surgery. In most cases it heals by wearing a splint for 6 weeks.

Tears of the lateral (outer) collateral ligament on the other hand often require operative management. Depending on the location and severity of the tear, the ligament is sutured, reattached to the bone of the upper or lower leg using small anchors, or replaced with an autologous (patient’s own) tendon (Fig. 5).

Complex ligament injuries, e.g. ruptures of several ligaments or recurrent injuries after ligament reconstruction, are another focus of our department. These are serious injuries and sometimes not all ligaments can be replaced in one operation at the same time. In certain cases, tendons must also be taken from the healthy leg and the ligament replacement may need to be combined with a correction of leg alignment.

The two menisci (medial and lateral meniscus) assume an important function in the load transfer of the knee joint. If there is a loss of meniscal tissue, the pressure on the surface cartilage increases, leading to damage to the cartilage and the formation of arthritis (wear and tear of the joint) in the long term.

Tears of the meniscus are manifest as pain under load (e.g. rotational movements). In order to maintain the function of the meniscus, we strive to repair this arthroscopically with sutures wherever possible (Fig. 6). However, not all injuries are repairable, so that in certain cases a partial removal of the damaged meniscus may be necessary (Fig. 7). A partial removal is always performed as sparingly as possible. 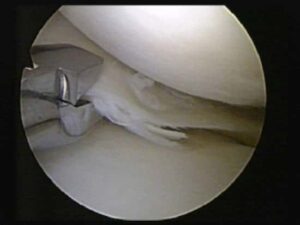 Fig. 8: Left picture: Meniscus only present in the marginal area; Right image: Knee joint after implantation of a replacement meniscus made of collagen.

Information on the treatment of cartilage damage and arthrosis can be found on the respective links.

Where a significant malalignment is evident, an operation can be performed to realign the leg anatomically. This involves cutting the bone at the thigh or lower leg and repositioning it before fixing it in place, so that the damaged previously overloaded part of the joint is relieved (Fig. 10).

After the correction, fixation of the bone with a plate and screws, analogous to an operation for a fracture, follows. This material can be removed again after about one year (Fig. 11).

Fig. 9: Loading of the knee joint in a bowleg. The red line depicts the load axis, which runs from the femoral head to the ankle joint. In this cas this cuts the knee in the inner part of the joint. 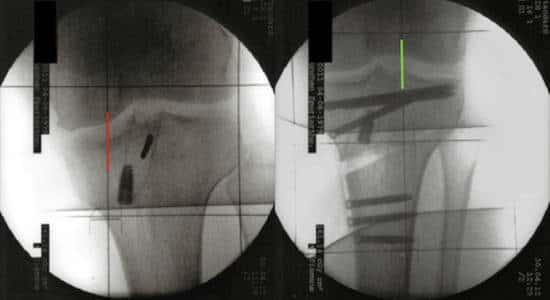 Fig. 11: X-ray image after a realignment operation to the lower leg for a patient with a bowleg deformity. The saw cut has been stabilized with a plate made of a carbon compound material.

Injuries of the kneecap

The most common pathologies of the kneecap that are treated in our department are instabilities (recurrent dislocation of the kneecap), cartilage damage and wear and tear (arthrosis).

After a dislocation of the kneecap (so-called patellar dislocation) there is usually a lasting instability of the patella, whereby the patella can “pop out” repeatedly. This is caused by a tear and subsequent loss of function of a stabilizing ligament (MPFL). In addition to a significant restriction for the patient during sports and everyday life, this leads to damage to the cartilage behind the kneecap.  Surgical stabilization of the kneecap is therefore recommended, especially for younger patients.  The most common surgical method here is the replacement of the stabilising ligament of the kneecap (medial patellofemoral ligament) with an autologous tendon (patient’s own gracilis tendon) (Fig. 12).

In many cases, there are other factors that promote instability of the kneecap. These include, for example, a knock-knee deformity, a rotational malalignment of the thigh bone or a pathologically shallow gliding groove for the patella on the lower end of the thigh bone. Depending on how pronounced these accompanying factors are, they may also need to be corrected (e. g. realignment operation, deepening of the patella groove).

Our department has special expertise in the partial replacement of the patellofemoral joint of the knee. This becomes necessary when there is already advanced wear and tear of the joint cartilage in this area and biological procedures such as cartilage cell transplantation are no longer feasible. The diseased area is replaced by a special mini-prosthesis, which was co-developed by our department (Fig. 13), sparing the rest of the native knee joint. 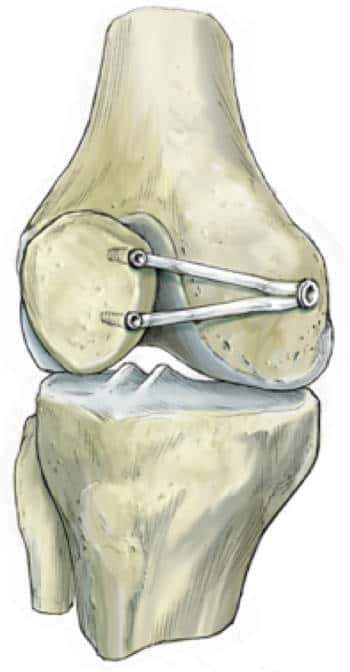 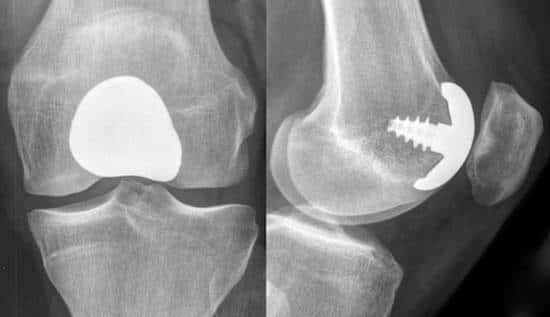 Fig. 13: Radiographs following a partial replacement of the patellofemoral joint with a mini implant.